Phylogenetic tree of the Asgard archaea. Names in red are the novel phyla proposed. The cartoon of Wukongarchaeota is shown on the right. Browse Data from eLMSG (An eLibrary of Microbial Systematics and Genomics) via LMSG_G000000521.1-LMSG_G000000609.1

Prof. Meng Li and his team from Institute for Advanced Study, Shenzhen University, have published an article entitled “Expanded diversity of Asgard archaea and their relationships with eukaryotes” in Nature on April 28th, 2021. In the study, they found six new Asgard phyla from various samples, including coastal sediments from Shenzhen Mangrove Natural Reserve and hadal seawater from the western Pacific Ocean. They constructed the first Asgard archaea cluster of orthologous gene (AsCOG) database. By analyzing the metabolic potentials of Asgard archaea and reconstructing the Tree of Life for Bacteria, Archaea and Eukaryotes, they elucidated the relationship between Asgard archaea and Eukaryotes in terms of the phylogeny, metabolisms and the functional evolution of Eukaryotic specific signature proteins, providing new insights into the unresolved basic scientific question - Eukaryogenesis.

Asgard is the fourth superphylum of the Archaea domain. Based on the phylogenetic analysis of genomic data, some scholars proposed that Eukaryotes originate from Asgard archaea. In 2019, a Japanese research group firstly reported an enrichment culture of Lokiarchaeota in the laboratory. The Science journal listed the study of Asgard archaea and eukaryogenesis as the top ten significant scientific breakthroughs of the year 2019. Therefore, studies on Asgard archaea and Eukaryogenesis have become the frontier and hotspot of biological sciences.

The Asgard archaea initially included five phyla, including Loki-, Thor-, Odin-, Heimdall- and Helarchaeota. Prof Meng Li’s group identified the sixth Asgard archaea phylum named Gerdarchaeota in mangrove sediments in early 2020. Collaborating with Eugene’s group, they reported 75 novel Asgard MAGs, which substantially expand the phylogenetic diversity of Asgard, and proposed six additional phyla. Five phyla are named after the Norse deities, i.e., Hermod-, Baldr-, Borr-, Kari-, Hod- and a deep branch Wukongarchaeota is named after the Chinese mythological character “The Monkey King – Sun Wukong”. The metabolic reconstruction suggests that Wukongarchaeota is an obligate hydrogenotrophic acetogen, which is dramatically different from other known Asgard archaea. This is why it was named after a Chinese mythological character, the departure from the Norse Pantheon for Asgard archaea.

This research is supported by National Natural Science Foundation of China, the Innovation Team Project of Universities in Guangdong Province and the Shenzhen Science and Technology Program.

Find the article at https://www.nature.com/articles/s41586-021-03494-3 and the story behind the paper at https://natureecoevocommunity.nature.com/posts/exploring-asgard-archaea-and-their-relationships-with-eukaryotes . 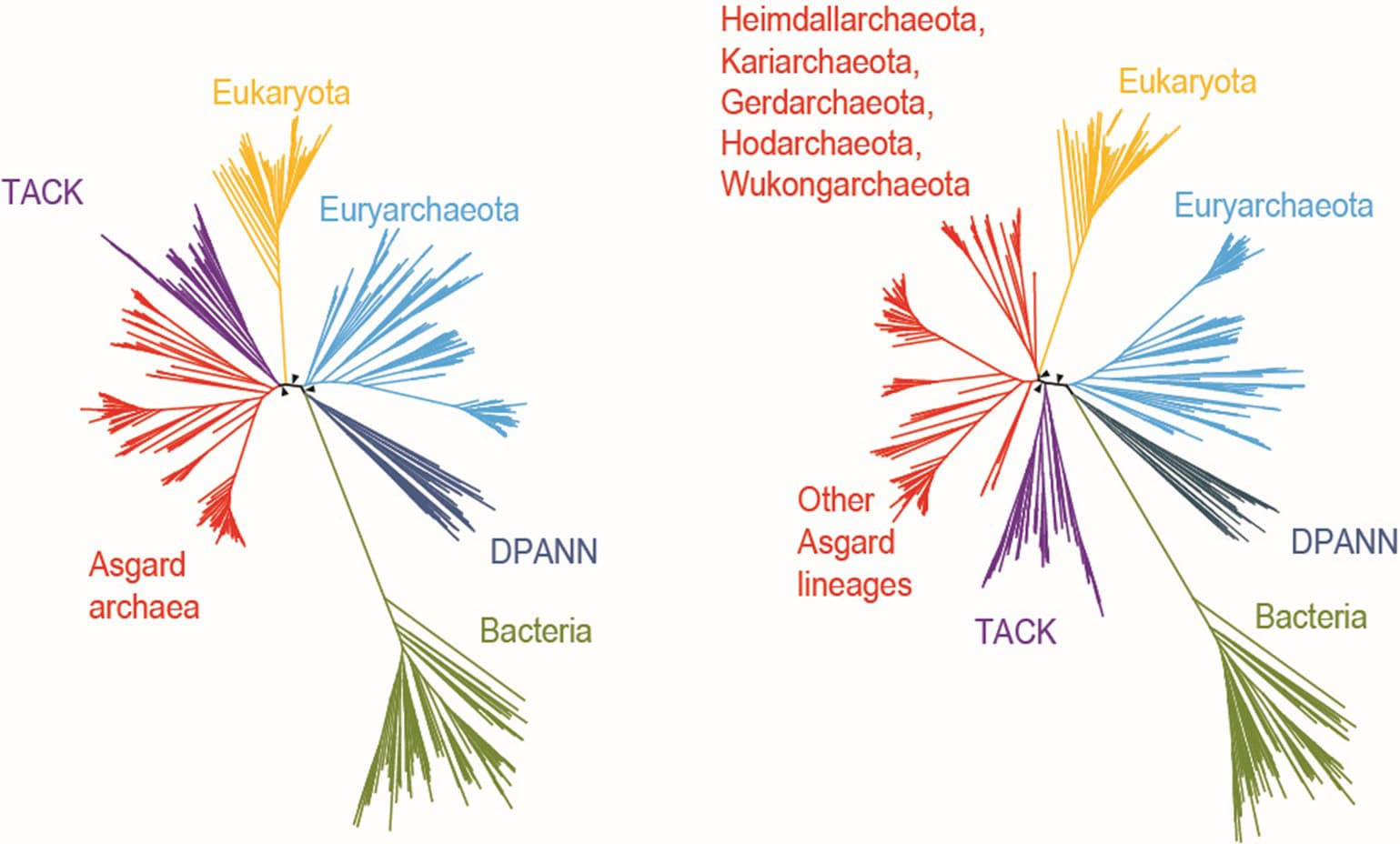 Phylogenetic tree of the Asgard archaea. Names in red are the novel phyla proposed. The cartoon of Wukongarchaeota is shown on the right.

In the study, they also constructed the Tree of Life with high species coverage and systematically analyzed the evolutionary relationships between Asgard archaea and eukaryotes. They made a solid effort to assess the robustness of the phylogeny concerning the selection of species and conserved marker genes. The phylogenetic results are best compatible with the origin of eukaryotes from within Asgard, from a common ancestor with the Heimdal-Wukong branch, but do not rule out a deeper branch for the eukaryote ancestor within archaea (Fig. 1). 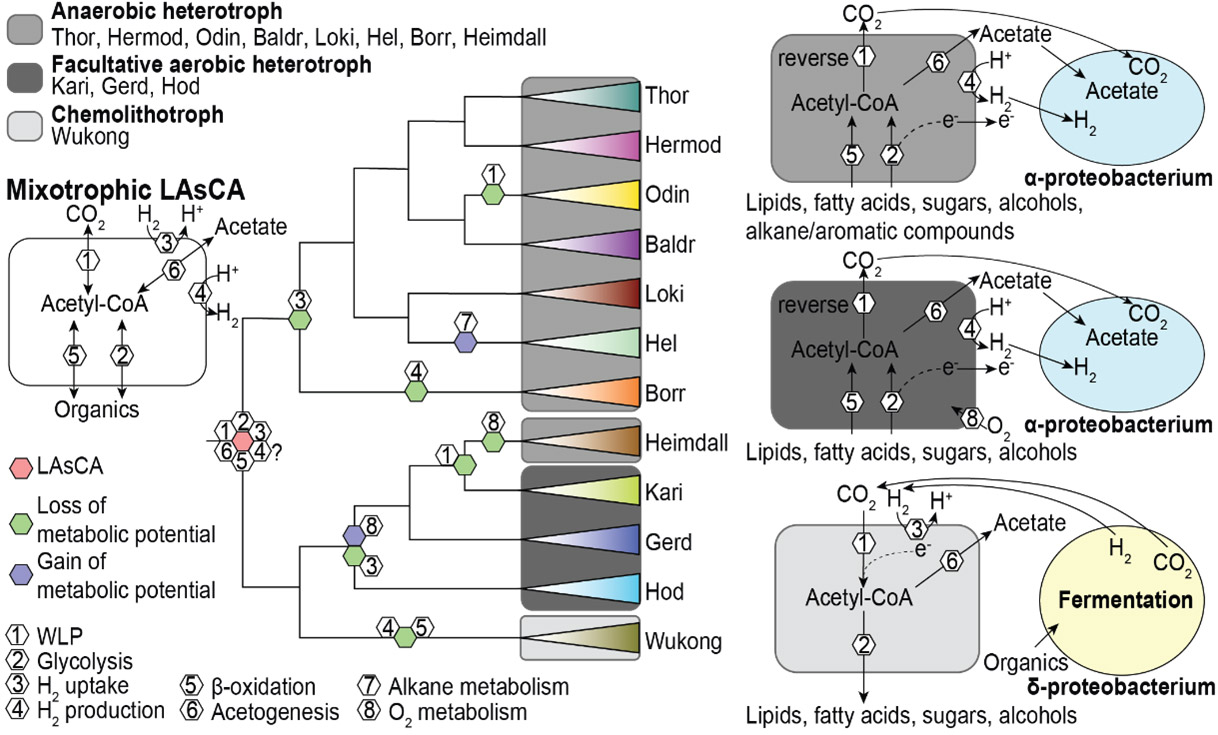 The construction of Asgard cluster of orthologous gene (AsCOG) database led to a major expansion of eukaryotic signature proteins (ESPs) among the twelve phyla of Asgard archaea. These proteins are related to functions like intracellular trafficking, secretion and vesicular transport, posttranslational modification, and protein turnover and chaperones. The patchy distribution and variable domain architectures of Asgard ESPs suggest a dynamic evolutionary history of Asgard archaea. In addition, the reconstructed evolutionary history of key Asgard metabolisms suggests that Eukaryotes may arise from the symbiosis of autotrophic Asgard archaea and fermentative bacteria, which sheds new light on Eukaryogenesis (Fig. 2).