Chinese scientists have produced two genetically identical long-tailed macaques using the same technique that gave us Dolly the sheep, the world’s first cloned mammal. The feat is a first for nonhuman primates, and despite limitations, it could lead to batches of genetically uniform monkeys for biomedical research.

Previous attempts to clone monkeys through the Dolly method, known as somatic cell nuclear transfer (SCNT), produced viable embryos but they failed to mature into healthy animals. The technique starts with taking the nucleus of a cell from a tissue like skin, and inserting it into an animal egg that has had its own DNA-carrying nucleus removed. That combination is then treated with enzymes that return it to an early embryonic state from which it can differentiate into every cell type in the body, like a just-fertilized egg. The egg is then implanted in a surrogate mother for development.

Success came from adapting several new techniques, says Mu-ming Poo, director of the Chinese Academy of Sciences’s Institute of Neuroscience in Shanghai, who led the work. These included a new type of microscopy to better view the cells during handling to using several compounds that encourage cell reprogramming, which hadn't been tried before on primates, they report today in Cell. Still, the success rate was low: Just two healthy baby macaques born from more than 60 surrogate mothers. And the researchers were only able to reprogram cells from fetal monkey tissue, not adult cells. The newborns were named Zhong Zhong and Hua Hua, after a Mandarin term for the Chinese nation and people.

Poo says the new approach is more customizable and can produce a greater number of genetically identical animals than the first technique used to clone primates, a simpler method called embryo splitting. He adds that combining SCNT with gene editing will allow researchers to create "ideal nonhuman primate models” for studying disease mechanisms and screening drugs. And improving their methods could lead to higher success rates and possibly even the ability to use adult tissues.

"It's a good piece of science," says Alan Trounson, a stem cell scientist at the Hudson Institute for Medical Research in Clayton, Australia. "[But] I can't see a high desire to use cloned monkeys for research." Trounson notes that monkeys are costly, researchers hesitate to use monkeys if alternatives are available, and drug regulatory agencies "don't demand monkey studies anymore."

He says one possible use might be to explore how genes and the environment interact in conditions such as Alzheimer's disease in which the influence of nongenetic factors is poorly understood. Alzheimer's and Parkinson's diseases "are the first two we are thinking about" for disease research using cloned monkeys, Poo notes. He adds that the monkeys could be used to study any diseases resulting from one or a few genetic mutations, including certain cancers. But the group’s first research effort will be more basic: regular imaging of the twins' brains to observe their neurological development. Because the pair have identical genes and are living in the same environment, researchers will be able to see whether their brains develop in similar ways or naturally diverge.

The team acknowledges that the work raises ethical questions, especially because—in principle, at least—the technique could be applied to humans. "[But] I would think society and the general public and governments will not allow extension of this method from nonhuman primates to humans," Poo says.

Ethicists are also concerned about the monkeys themselves. "At present, it has not been sufficiently demonstrated that there are no alternatives to using macaque monkeys for such research," Peter Dabrock, an ethicist at Friedrich-Alexander University in Erlangen, Germany, wrote in a statement.

Poo acknowledges that using nonhuman primates for research is more accepted in China than in the West. But he emphasizes his group is following international guidelines for the treatment and care of their monkeys. And he agrees that the minimum number of animals should be used. But, Poo argues: "Once we demonstrate the cloned monkey's usefulness in curing disease, I hope [Western societies] will gradually change their minds."

With reporting by Gretchen Vogel. 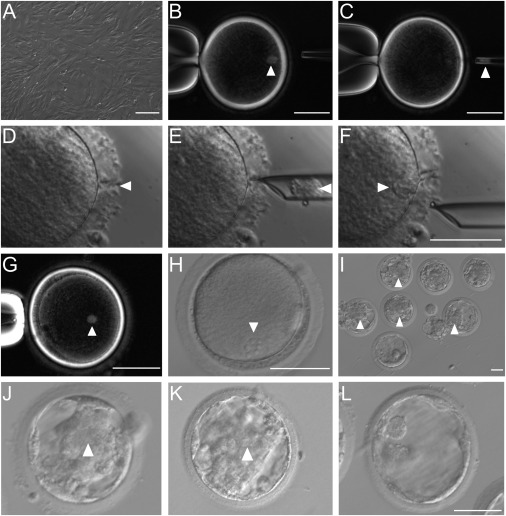 (B and C) Spindle-chromosome complex (arrowhead) in a monkey MII oocyte before (B) and after (C) removal.

(D–F) An oocyte with a slit in the zona pellucida (D, arrowhead) induced by laser irradiation, and the HVJ-E-incubated fibroblast (arrowhead) before (E) and after (F) injection into the perivitelline space. 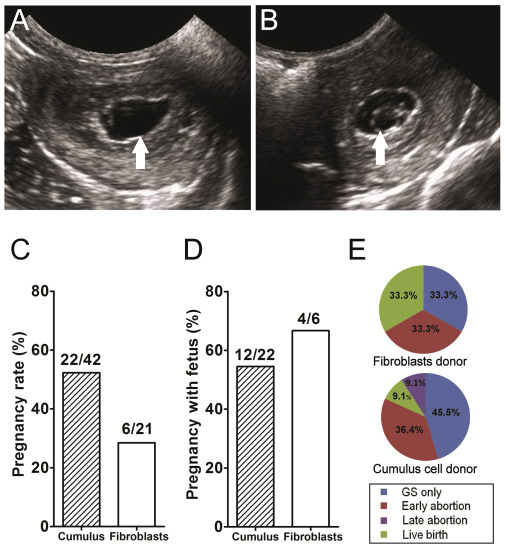 (A and B) Ultrasound imaging of the pregnancy status from SCNT with cumulus cells, showing example images of a surrogate uterus containing a gestational sac (GS, arrow) without a fetus (A) and with a fetus (B, arrow).

(E) Overall percentages of pregnancies that yielded gestational sacs (GS) without a fetus, pregnancies with fetuses that led to early abortion (within two months) without a fetus, late abortion with a fetus, and live births (by caesarian section) for SCNT using fetal fibroblasts (in healthy condition) and adult cumulus cells (lived for a short time), respectively.

(A and B) Images of Zhong Zhong (ZZ) and Hua Hua (HH), two cynomolgus monkeys generated by SCNT using fetal monkey fibroblasts, at 20 and 34 days after birth, respectively.

(C) Three examples of short tandem repeats (STRs) from ear tissues of “ZZ” and “HH,” showing that their nuclear DNA was identical to that of the donor fibroblast but different from those of their oocyte donor and surrogate monkeys. More extensive list of STRs are shown in Data S3x

(D and E) Examples of single-nucleotide polymorphisms (SNPs) for “ZZ” and “HH,” respectively, showing mitochondria DNA SNPs that were identical to those of the oocyte donor monkey but different from those of surrogate monkey and donor fibroblast. More examples are shown in Figure S3 Figure S3.

登 录
Your current browser version is too low, please upgrade your browser (IE10 and above) or install Google Chrome!
Cancel